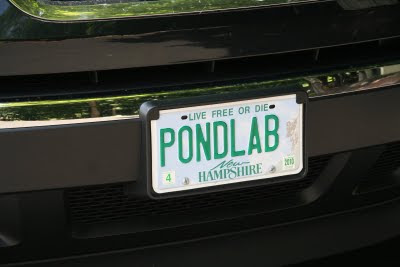 New Hampshire ranks second in the nation for having the most vanity plates. I now join the ranks. I have never had vanity plates but when we purchased a new vehicle this summer and my husband suggested that I get vanity plates that reflected something about my second life with Labs, I thought that maybe this was my opportunity to try it out. Of course it was a bit tricky to limit my choices to the seven letters allowed. My first choice would have been my kennel name, Pondview. But for one extra letter, oh well. My husband thought perhaps "Pondvu" but that somehow didn't appeal to me. If it couldn't be spelled correctly(the teacher in me, I guess), then it was not to be. LABSR4ME would have been a great choice, too. Oooops, just that one extra letter. I began to think that vanity plates were not for me and that perhaps the 7 letter limit was a government conspiracy to discourage people from getting vanity plates. I have 7 Labs and so another good choice would have been 7NHLABS which was available but I won't always have 7 Labs and I certainly want to keep my plate for a while. Finally I settled on PondLab. It satisfied part of my kennel name but also gave credit to my beloved Labrador breed. Now I am easily identified as I drive about town. There she goes, the lady with the Pondview Labs.
Posted by 6labsgirl at 4:35 PM