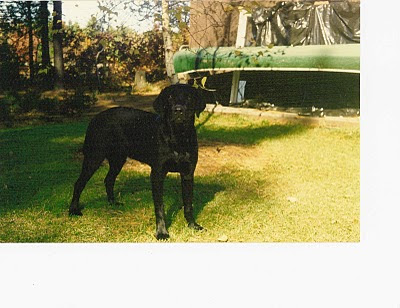 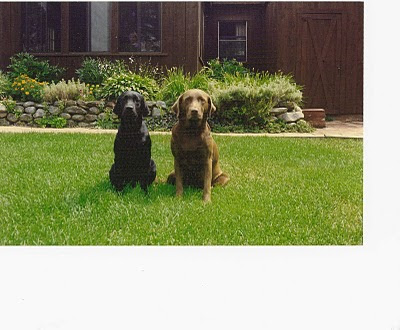 The Forever Dog #2
Piper, was all of what Addie had been and more. Molly, our chocolate Lab was two when I drove to Merideth to bring Piper home. A sweet, adorable bundle who soon earned the nickname of ‘Hyper Piper’, because she was just that. If you turned your back, she was into something. Crates became a way of life again.
I believe that sometimes, those special spirits return to teach us yet another lesson. This was true of Piper. She was a happy, free spirit, who never stopped moving. She jumped on visitors, dug holes in the yard, and ate toilet tissue and Kleenex ( to the point that I began putting the bathroom wastebaskets into the tub so she could not get to them).
When she was still a puppy, she fell into our pool and although Labs instinctively swim, she panicked when she could not find her way to solid ground. Frantically she kept scrambling at the pool’s edge and by the time I pulled her flailing body out of the water, she was shaking. Unfortunately, her shaking was not from fright or cold. At four months, she was having her first seizure. It was the beginning of a lifetime of health issues that would challenge me and change her life. I was familiar with dog seizures. Ironically, Addie had had seizures too.
Still, her free spirit was delightful. For as many times as she was in trouble, there were just as many times that she brought joy to our lives. And when I look back on those troublesome times, now they make me laugh.
One Christmas, a 5 lb tray of fudge disappeared off the kitchen counter. At first, I blamed my sons. I was horrified when I realized that it was Piper, not the boys, who had eaten all that chocolate. Immediately, I called the vet. Chocolate can be lethal! But for all of Piper’s health issues, she apparently was able to handle 5 lbs of fudge. Then there was the time when she found the sparrow’s nest in the bush by the pool. Before I was able to stop her, 3 baby birds became her dinner.
Over time, her seizures became more frequent and increased in intensity. I read all I could about seizures in dogs. I tried vitamins, herbs, and homeopathic treatments, in hopes that something might make a difference. Reluctantly, I resorted to Phenobarbital, an anti-seizure medication that often effectively controls seizures. Her seizures never completely stopped. It was heartbreaking to watch as she would search for me when she sensed a seizure coming on.

As if the seizures weren’t enough, when she was 5, she was diagnosed with PRA(progressive retinol atrophy), an eye disease that can be hereditary in Labs, although there had been no known history of it in her line. Her eyesight gradually became worse and eventually she was completely blind. Still that didn’t stop her. She navigated the house quite well, never bumping into objects, continuing to make her way up and down stairs, outdoors, and even into the car. She stuck close to Molly as though she was her personal Seeing Eye dog.
When she was about 8, the pressure began building up behind her one eye and the vet put her on medication to reduce the swelling. It was July and the boys were vacationing in NC with friends, when I made the call to tell them I was putting Piper down. Steve begged me to wait until they got home but I couldn’t. The whole side of her head had become swollen. I had made an appointment for an ultrasound after the weekend but we never made it. She began turning in circles and became disoriented.
I sat sobbing in the vet’s office, determined that I would be with her until the end. I would not do the same as I had for Addie. I was getting my chance to do it right. I held her head in my lap and watched her slip away from me. I never imagined how many more times I would see this girl again.
Posted by 6labsgirl at 8:58 AM