All summer we tried to catch him. That little fellow undermined our rock wall that supports the pool, digging holes and popping up in most unusual places. My husband tried to entice him with all sorts of tasty treats but to no avail. He eluded our every effort. But with the onset of Fall, he must have foraged enough and become a bit careless in his habits. Perhaps eating more than usual, he became lazy and fat as he got ready to hibernate for the winter. Whatever the reason was, he ended up wandering into the cozy have-a-heart trap. "BANG!", the door snapped shut and he was captured! Poor little fella! He was scared stiff! The dogs felt it their duty to greet him accordingly, curious as to why he was now going nowhere fast.
"I think he's in his crate!" commented Alex.
"Yes, he must be having a 'time out'," James agreed.
"Well, he probably ate poop!" Meadow added. 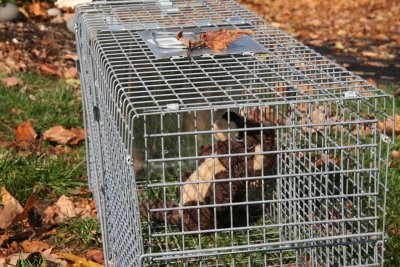 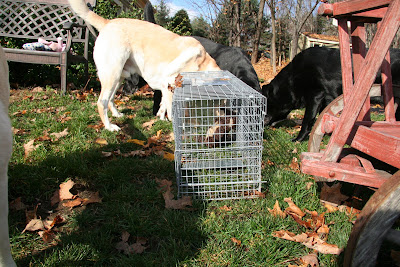 I think we might be able to rehabilitate him with a bit of clicker training. Perhaps we can try through the winter. Maybe by Spring we can let him go and hope he has learned to stay in the neighbor's yard. After all, he is sort of cute. 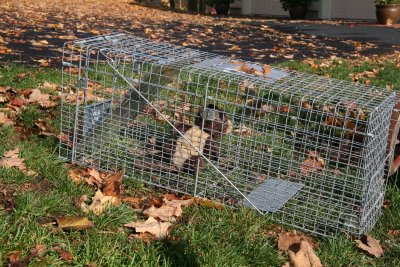