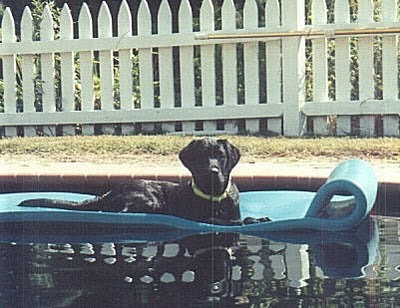 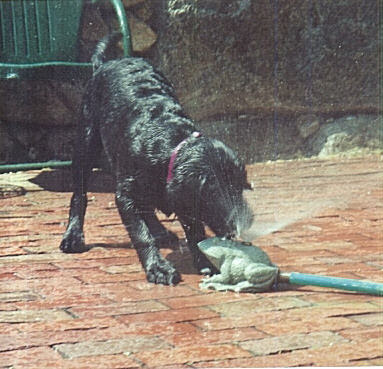 It was on Valentine’s Day, 2001 that a litter of 12 lab puppies was born to “Wyla”. In April, Kate, my co-owner and breeder of Lisle and Bounty, called to say she had a girl that needed a job. And that is how Vixen came to me. Kate had named her Vixen and at the time I thought the name Vixen didn’t seem to fit. But as the days turned to weeks, I quickly realized how fitting it was. Kate had been right. She did need a job! Her energy and level of determination was evident from the beginning. Just as those free spirits before her, Addie and Piper, she challenged me in every way.
She wasn’t a cuddly little puppy. She never was patient about waiting and would make this kind of howling screech like nothing I had ever heard, if she was excluded from what the rest of the girls were doing. She would race away from me at every chance to play in muddy streams and would jump into the pool uninvited. She found ways to elude me even there, since she learned to leap unto the pool rafts and float about at her leisure.
By 3 months she was proving her agility potential by jumping and leaping from stone walls and steps. As soon as I wasn’t watching, she dug holes in the yard, in my gardens, anywhere she could. The wastebasket trash, as with Addie and Piper, was never safe with her. And like the ‘girl with the curl in the middle of her forehead; ‘When she good, she was very, very good but when she was bad, she was horrid’.
A genuine Labrador character, loving people and other dogs and she quickly became the joy of my life. Her enthusiasm to perform was unsurpassed and so the first time I ran with Vixen, I knew that she would be an incredible agility dog. A dog that I could be a partner with and that I would form a special bond with. She ran like the wind, and she ran not just for me but for the sheer joy of the ‘job’. Even at practice she could barely wait her turn while another dog was running a course. She would whine and even howl, trembling with impatience. I will never forget one of those training sessions. While another dog was setting up, waiting for his owner’s signal to begin, I had inadvertently dropped her leash. As the other dog’s owner said, “Go!” Vixen bolted from my side and in a flash, was over the first jump and up the A-frame, leaving the other dog wondering what had just happened to his turn. It was this very spirit that made me want to run with her.

In October, 2005, I entered agility in the AKC Labrador Nationals in Rhode Island. For me, it was the opportunity of a lifetime to perform with other Labs, even in a novice class. Even through the relentless rain those two days of showing, her energy caught the attention of spectators and competitors. One of them came up to me after we had finished the jumper’s course and asked what her line was and if I had ever bred her. I had not planned to breed Vixen. I had Bounty’s daughter Meadow who was my next choice to breed. But something changed for me during that show, not just the fact that someone had asked if I had ever bred her, but the feeling that I needed to have a piece of who she was continue on. I bred Vixen in November, after the Nationals, and 9 puppies were born January 6. One of them, my James, who is nothing like his mother, is my connection to what I once had with her.
Like those who came before, her life was too short. The following November, just one year after deciding to breed her, just one year after the Nationals, an amazingly energetic and fit girl was diagnosed with final stage liver failure. She was only 5. She was jumping on the vet on Monday and by Saturday she was gone. Knowing that I would never run with her again, witness her zest for life, my tears have never stopped flowing. She had touched the lives of those who knew her but more than that, she had changed my life forever.