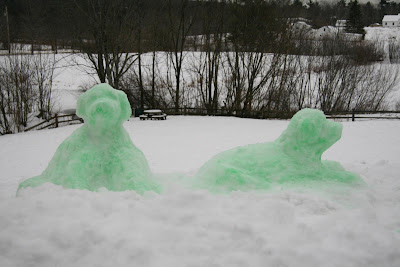 Paddy and Penny, the lucky Lab pups stopped by Pondview last week to play with Caroline and Glory. They were met with much indifference. In fact, Caroline took a nibble out of Penny's neck as she whizzed by racing to get her Jolly ball to play with. Apparently these 'go green' pups were a bit too docile for my rambunctious duo. No matter, they disappeared as quickly as they had appeared. The warm temperatures were not to their liking. And after all, they were St. Paw-trick's Day pups..."a wee bit o' magic' in their making, I imagine.

oh my gosh how cute Cheryl!

is james hidden in the pup laying down? very nice.. you have out dogged yourself this year!!